Tag: until the harvest comes 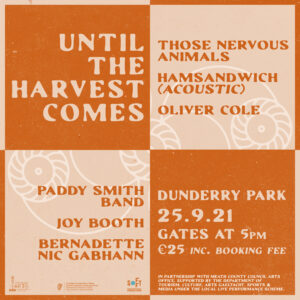 The intimate event set on the beautiful grounds of Dunderry Park, Co Meath, will celebrate and boast local Arts and Music from Co Meath on September 25th 2021. In total, 6 Acts will perform on one mainstage, built by wonderful craft makers to harmonise with the surrounding environment of nature. The event also falls on the Autumnal equinox, which marks the two moments in the year when the Sun is exactly above the Equator and day and night are of equal length and the celestial equator intersect. The energies of this special period in the calendar will be a force as it emerges with the creative flow from those performing at the event and those attending. Certainly, it will be an experience to enjoy and cherish after such a long period of isolation for so many in one of the most uncertain times in modern history. A chance to come together with a shared passion for the arts and Mother Earth/Nature. 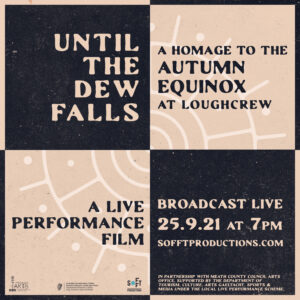 Along with the musical line-up on the evening, there will be a live performance cinematic concept short film titled ‘Until the Dew Falls’, a homage to the Autumn Equinox shot at Loughcrew which will be screened at the event and will also be broadcast live at 7pm over on www.sofftproductions.com for all to watch. The music and artistic homage to the autumn equinox will be an episodic journey through the different moments that lead up to this celestial event.

Keeping it organic, SoFFT Productions are working with local Meath artists to develop brand new pieces of music, dance and poetry which will then be filmed at Loughcrew. Joining together the poignancy of place with artistic expression.

You can register now for the screening of the film at the address below.
https://www.sofftproductions.com/sofft-films

The Line-Up of local Musical Acts include:

THOSE NERVOUS ANIMALS; started making music together in 1981. Forty years later the band released their first complete album, The Mission Sessions, consisting of songs from early days and from every decade since, the most recent material recorded remotely during the first Covid-19 lockdown of 2020. Unusually for Irish bands of the era, Those Nervous Animals mixed blue-eyed soul, funk and indie into an uncategorisable whole.

HamsandwicH One of the most enthralling live acts in recent times, HamsandwicH are well known for their incendiary live performances which has put them right at the top of the live acts to see today. With the combination of Niamh Farrell’s powerful yet sweet vocal and Podge McNamee’s juxstaposing baritone the band are given its signature calling card. If ever there was a band to feed off their audience it is HamsandwicH. Each show is bona fide celebration with everything from balloons and confetti to their unique crowd interaction on display. Number 1 album Stories from the Surface is out now.

OLIVER COLE Having had some success with his first band Swampshack, Oliver Cole formed the three-piece rock band, Turn. Oliver was Turn’s singer, songwriter and main guitarist, and they soon signed to Infectious Records in London, which was home to Muse, Ash and Garbage, among others. Turn enjoyed great success and popularity, playing sell-out gigs at Vicar Street and a packed to the gills standout performance at the Oxegen festival in 2005.

PADDY SMITH BAND In 2013, Paddy released his 12-track album called ‘Let Those Blues In.’ It earned him kudos and airplay on radio all over Ireland. In 2016, a short documentary by the same name aired on Irish national television & won high praise and global awards for telling Paddy’s life story about the blues and his life today in recovery. Whether he’s performing blues standards or his own original material that’s informed by his experiences, Paddy Smith blows the blues. And he’s ready to share it with you.

BERNADETTE NIC GABHANN Comes from a musical family in County Meath. She has travelled the world playing fiddle & promoting Irish Arts. Having toured as Fiddle player with Troupe 2 of  ‘Michael Flatley’s Lord of the Dance’ through many US towns, and also to Alaska & South Korea. She also performed with Gaelforce Dance, which toured Eastern Europe and Taiwan, and spent a summer in Busch Gardens, Virginia with Irish Thunder. Bernadette then lived in Nashville for a little while then, before moving back to Ireland.

JOY BOOTH A singer/songwriter from Navan, Co. Meath. No stranger to some of Ireland’s best venues and festivals, she has opened shows for many musical luminaries, including Wallis Bird, Cathy Davey, Pilgrim St, Declan O’Rourke, Mary Coughlan and The Lost Brothers. Joy’s own brand of music is a folk/blues blend, coupling captive melodic turns with disarmingly honest lyrics. Her long-awaited debut album “All You Were” features a host of gifted Meath-based musicians and is due for release in 2021.

Tickets for the event are €25.00 including the Booking fee and are available at Tickets.ie here: https://secure.tickets.ie/Listing/EventInformation/43734/until-the-harvest-comes-dunderry-park-25-September-2021

Notes on the artwork: The symbols on both the Line-up poster and the film poster are simplified versions of art found on artefacts in Loughcrew. The symbol on “Until the Harvest Comes” comes from a bone slip found in Cairn H and “Until the Dew Falls” comes from a stone in Cairn T. The split sections symbolize the even split between night and day at the equinox.

This is a family-friendly event. However, under 18’s must be accompanied by an adult. Event subject to government restrictions. 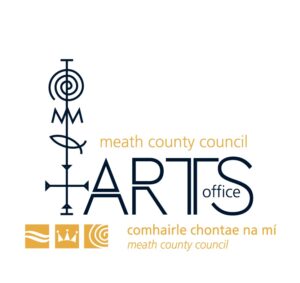