Today Röyksopp released a new version of the Robyn collaboration track ‘Monument’ to fans with the following quote:

Röyksopp and Robyn premiere the ‘Monument’ video via Vice + Intel’s The Creators Project. ‘Monument’ is taken from the critically-acclaimed ‘Do It Again’ mini-album out now on Dog Triumph via Wall of Sound and Cooking Vinyl. ‘Monument’ remixes from Kindness and Mark E will be available from 18th August.

Behind the scenes / making of documentary
http://youtu.be/xeUx5xkWRts

Watch the ‘Monument’ Behind The Scenes documentary:
Röyksopp & Robyn’s ‘Do It Again’ has become this Summer’s most talked about record and live show, garnering worldwide critical praise, a sold-out tour and chart success.
As Röyksopp & Robyn come to the end of their DIA tour they bid farewell with the release of their final video – for the epic 10-minute long track ‘Monument’, the inspiring mini-album opener.
Director Max Vitali created a weightless and timeless space by shooting on a wire-based camera, drawing the viewer in on a journey of self-discovery, a central theme throughout the song. The video was produced by VICE + Intel’s The Creators Project.

“The video is about exploring the space around you and in you and finding your own space within it all. Half real, half fantasy. The way I see film is as a hybrid of technology and emotions, and hopefully there’s an artistic vision there as well. In a way that is what Röyksopp & Robyn also do, they merge something real with something computer-generated to create bigger landscapes than possible without the help of technology.” (Max Vitali)

“The video for ‘Monument’ is a kind of inner journey which I think is also what the music is about. Like space in time and physicality and your own experience of your body.” (Robyn)

“There is light and darkness colliding and it’s all being served on a lit-up platter to encapsulate this ceremony we are partaking in. It has been influenced by the iconic imagery in 70’s sci-fi comics that we grew up with.” (Svein Berge)

Röyksopp and Robyn’s ‘Do It Again’ mini-album hit #1 on the iTunes Electronic chart in over 10 countries including the UK, US, Germany, Sweden, Holland, Canada and Japan and entered the Top 10 on the iTunes Album chart in over 10 countries including the US, Australia and France with a #1 chart position in Sweden. ‘Do It Again’ entered the Official UK Album Chart mid-week at #8. The ‘Do It Again’ mini-album serves as an introduction to the new Röyksopp album. Details to be announced.

‘Do It Again’ Tracklisting:

About The Creators Project:

Praise for ‘Do It Again’:

“… crying on the dancefloor brilliant” The Independent

“A Scandipop dream team” The Guardian

“Pop heaven… ‘Do It Again’ will be the sound of your Summer.” Grazia 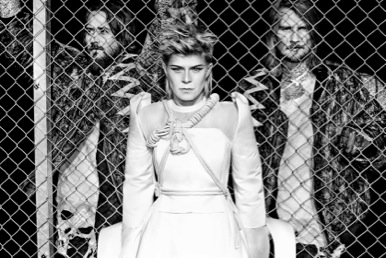 ‘DO IT AGAIN’ TOUR RUNS THROUGHOUT SUMMER

Röyksopp and Robyn announce the release of the ‘Do It Again’ mini album, which will be released on Dog Triumph via Wall of Sound and Cooking Vinyl on 23rd May 2014.

‘Do It Again’ will be the first single available from 25th April. This serves as an introduction to a new Röyksopp album to be released later this year, which will feature two of the tracks.

The ‘Do It Again’ tour with Röyksopp and Robyn, already described as one of the most exciting tours of the Summer, begins at Sonar Festival in Spain on 13th June 2014, and includes a headline slot on the BBC Radio 6 music stage at Latitude Festival on 19th July.

Röyksopp and Robyn unveil a clip from ‘Monument’, the first track on the mini album:

Watch the ‘Do It Again’ tour trailer here:

“This 5 track mini-album is the accumulation and embodiment of the synergy between Robyn and ourselves. We’ve intended this to be a diverse yet cohesive and thought through musical venture; it’s meant to be an expression where pop & art reign side by side.” (Röyksopp)

Röyksopp and Robyn were inspired by each other’s company and compelled to create something they had never done before, building on the brief moments when they had come together in the past. Having worked together on ‘The Girl and the Robot’, which appeared on Röyksopp’s ‘Junior’ album in 2009 and ‘None Of Dem’ on Robyn’s ‘Body Talk’ Pt. 1 in 2010, the ‘Do It Again’ mini album sees the two artists doing just that.

“… this doesn’t sound like Röyksopp featuring Robyn or Robyn produced by Röyksopp, it’s just something else entirely”, “The word ‘collaboration’ has never before been more justified in the world of music!” (Röyksopp)

“Svein and Torbjörn and I started working on new music in the beginning of 2013, I´ve been going back and forth to Bergen to record and write with the boys up until recently. Collaborating with S & T is something I enjoy very much. In the beginning we just knew we wanted to do something together and then it started to feel more like a band thing than songs for a Röyksopp or Robyn album so we´re releasing this music together as a band you could say.” (Robyn)

The ‘Do It Again’ mini album represents the perfect coming together of three of the most original musical minds in the world.

‘Monument’s grandeur and grace is as distinctive as it is moving and was the first song where they wrote lyrics together. A defining moment on the mini album in the shape of a near ten-minute long anthem, which was inspired by a sculpture from artist Juliana Cerqueira Leite, which gave Robyn a “physical experience of what it’s like to define yourself or stand for something or figure out who you are.”

‘Do It Again’ is the first single taken from the mini album and is an “accidental pop song” written after a night out together in Bergen. It is one of the most effervescent, effortlessly uplifting electro-pop tunes of recent years, and started life as a rave-inspired throwback.

One of the first songs they started working on was ‘Every Little Thing’, the mini album’s tear-stained electro-ballad (key lyric; “baby, why you falter, when you know I’m waiting here”).

Elsewhere, the ‘Do It Again’ mini album covers big thumping house in the shape of the club-ready ‘Sayit’, which features a near duet between Robyn and what sounds like an aroused robot. On the other end of the spectrum there is the closing ‘Inside The Idle Hour Club’, which utilises Robyn’s vocal discreetly to create a pensive, slowly evolving soundscape that’s worth diving headlong into.

‘Do It Again’ is compelling not just for it’s personality, but also because it is simply not what you expect.

RÖYKSOPP AND ROBYN WILL “DO IT AGAIN” ON 2014 TOUR

RÖYKSOPP AND ROBYN WILL “DO IT AGAIN” ON 2014 TOUR

(London) – Röyksopp and Robyn have announced their plans for a joint tour during the summer of 2014. The “Röyksopp & Robyn Do It Again Tour 2014” will head across Europe, North America and points beyond, stopping at carefully selected venues around the world.

Robyn and Röyksopp have a long history of working and performing together. They collaborated on 2009’s “The Girl and The Robot,” (from Röyksopp’s album Junior) and again on 2010’s “None of Dem” (from Robyn’s album Body Talk). They have also played live together several times, notably at the iconic Hollywood Bowl in Los Angeles in 2011, and most recently, Robyn joined Röyksopp onstage in Trondheim, Norway. Röyksopp and Robyn are currently working together in the studio.

Says Robyn, “Playing this music live with Svein and Torbjørn is going to be wildly fun!” Add Svein and Torbjørn from Röyksopp, “We look forward to basking in the warm glow that is Robyn’s presence. We predict one helluva ride.” The first festivals and dates will be announced this week.