Aoibhinn who plays Nidge’s wife ‘Trish’ on the hit TV series LOVE/HATE takes on the lead role in the video for the latest single ‘YESTERDAYS NEWS’ from Tupelo’s album ‘Push On’. The song itself also features another Irish star in songstress Eleanor McEvoy.

Check out the video below: 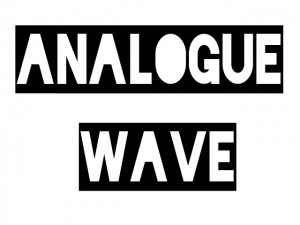 Analogue Wave are an electronic duo who will release their debut album ‘N.L.G. W.V’ on September 27th. In a time when the general adoption of neoliberal economic policies streamlined throughout the 1980s and 1990s, Analogue Wave forged their sound out of a 1980s grimey recession-laden Dublin.

Del Chaney’s (Vocalist and songwriter) origins began in the school choir room to a Beatles cover band before digressing to serious bouts of poetry. It was this temporary transition that lead him to delve further into his musicality. Deciding that he wanted to find an outlet to diffuse his words amassed with music, he discovered Cubase and began developing Dance Music whilst studying Music Theory. Embarking on the club and dance scene in Dublin and donning various outfits and bands along the way.

The other half of Analogue Wave, Andrew Sneyd otherwise known as Gint, kicked off his venture into music at the tender age of 13 heavily influenced by the likes of Sonic Youth and the Pixies. At 17 he began making electro music starting off on an Amiga 500 computer with a program he had gotten free in a magazine. He would then immerse himself in a DJ career, which saw him play several dates with Belgium’s CJ Bolland who flew him to Belgium for a week in studio. In 2012 Gint and Del had departed from their previous bands and began working on what would become Analogue Wave.

The Dublin duo emerged onto the scene earlier this year with their first single ‘Fingers’ in March followed closely by ‘Mezkal’ in May receiving extensive airplay on various radio stations from the BBC to RTE’s 2fm. Heavily influenced by everything from rock to electro the band takes their unique sound from blending a plethora of genres from reggae to techno all the way back to rock and roll.  Being hailed as Ireland’s answer to Unkle and Massive Attack this pair of musical maestros are the ones to watch in 2013.

This summer will see the band bring their jaw dropping live show to the masses with a full Irish tour on the cards. The band have twisted and re-worked their music into an energetic mix of rock concert and rave with a beautiful visual show. The album art for N.L.G.W.V comes from a controversial 1963 bicycle safety interlude film called ‘One Got Fat’. (see footnotes) 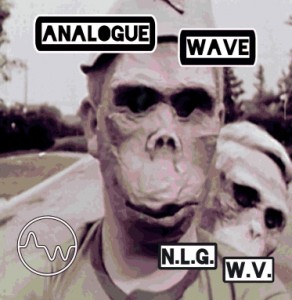 The artwork for n.l.g. W.v. comes from the 1963 bicycle safety interlude film ‘one got fat’, In the film, ten friends, who are children with monkey faces and tails, plan on going to the park for a picnic. They all ride there on their bikes, but each one meets a different fate on their way to the park as a result of their failure to follow specific bike safety rules (like not making hand signals, not reading traffic signs, not riding with traffic, riding double, or riding on the sidewalk). One by one, each of the friends makes a mistake and suffers a horrible fate. In the end, only one of the friends (who not only followed all the bike safety rules, but is also a normal human, whose face is not shown until the very end) makes it to the park and eats all the food by himself. At the start of the PSA, Slim gave the human his picnic because it was large and the human had a rear basket. Seeing this, the others persuaded him to take their food, meaning he has it at the end. Thus, as the title says, “One got fat!” Three of the Monkeys are seen in hospital beds.

The film has been described as a concentrated dose of lab-purified nightmare fuel that makes monkeys more terrifying than they already are. The title ‘n.l.g. W.v.’ came from the tradition used by a lot of artists on their debut album, which is naming it after the actual name of the band, but Analogue Wave wanted to add a twist to this so they removed all the vowels from their name which left ‘n.l.g. W.v.’ which gets its Nationwide release on Sept 27th.

Good Seed PR announce they will be the new imprint for PURE SYNC in the territory of Ireland.

Tuesday 25th June 2013, Good Seed PR are pleased to announce they will be the new imprint for PURE SYNC in the territory of Ireland.

Blending the two companies ethos “You make the music, we spread the word” and ‘Bringing Sound & Vision Together’, this union will be a most welcome deal to artists from both Ireland & Internationally. Bringing the best music to the forefront in all creative industries.

Good Seed PR & Pure Sync will provide Creatives, Directors, Producers & Editors with a ‘One Stop Shop’ for creative music searches, rights negotiation & licensing, bespoke composition, re-records & sound design, pre-cleared music & sonic branding in Ireland. Along with also providing Artists, Composers & Producers with a global platform and opportunity for their music to be placed in Films, TV, Advertising, Games & all other forms of media.

MD of Good Seed PR Linda Coogan Byrne commented “We are very much looking forward to making a real mark with Pure Sync in Ireland’s Sync market and hope to be able to continue to get Independent, well known & unknown music or bespoke composition & re records onto more and more platforms within the realm of Advertising, TV, Film and Gaming. This kind of merge has not been done before and if there was ever a right time for this to happen it is now, when our industry is ever changing and expanding. It is an exciting time”.