ELEANOR MCEVOY ALONE IN THE STUDIO, HER MUSIC STRIPPED TO THE BONE ; New album Naked Music Out Feb 12th

ELEANOR MCEVOY ALONE IN THE STUDIO, HER MUSIC STRIPPED TO THE BONE 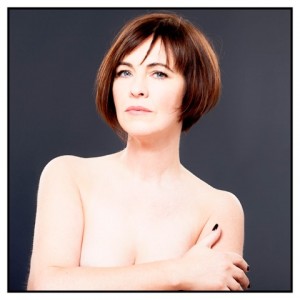 Released on Friday, 12th February 2016, Naked Music is the title of Eleanor McEvoy’s new album, recorded alone in the studio to create an intimate collection of her music at its most raw – one instrument, one voice, performed live. Best known for her songs Sophie, Harbour, The Secret of Living and of course Only A Woman’s Heart, Eleanor’s new album features exclusive artwork by the famed painter Chris Gollon. Starting in February, Eleanor will be presenting her new show “Naked… Live”.

The seeds for Eleanor and Chris’ artist collaboration were sown after Eleanor bought Chris’ painting ‘Champagne Sheila’ after spotting it in a London gallery. Before leaving, Eleanor left some of her music for Chris and his agent to listen to.

Eleanor was, at the time, finishing some recording where she was “studio-performing”, playing hers and others’ songs as she might at her solo shows. The recordings have a very exposed intimacy, so it seemed a possibility that Chris should be asked to do a painting for the cover in this solitary context.

As a body of work, Eleanor’s recordings acquired the name ‘Naked Music’, which would give a better focus to the two artists’ desire for mutual expression. Being offered this title, and with some song suggestions, Chris was so taken with the songs he completed four paintings in response – two on the ‘Naked’ theme, and two others related to song titles and lyrics. The first ‘Dreaming of Leaving’ was written by Eleanor and Lloyd Cole. The other ‘Lubbock Woman’, a downtrodden cameo, is a song by West Texan legend Terry Allen. The paintings were such a hit, that all four talked their way into the Naked Music CD artwork.

The images, the CD artwork, sat in pride of place in the Metropolis Studio and exerted some influence on the mastering and final track order.

“..once Eleanor McEvoy launched into her fiery set, accompanied by nothing more than her guitar, fiddle and glass-shattering vocal cords, we knew we were in for a fearsome night of music…A lone performer plying a singular trade with considerable élan.” – Siobhain Long, Irish Times

“Her voice is clear and potently charged, one hundred percent believable; when her songs are bitter the acid burns your eyes, when they are sad you can taste the tears.”- Sean Laffey, Irish Music Magazine

“McEvoy’s voice has a depth of expression born from living the songs rather than just singing them. It’s a genuine privilege to be on the outside looking in.” – Jackie Hayden, Hot Press

“It was yet one more triumphant outing for a musical wizard and a woman of immense talent.” Wexford Echo