mark black and the trips 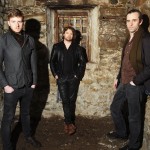 Single: Leave Without A Trace + bonus track: Try Out on iTunes Nov 9th

‘Leave Without A Trace’, the second single from the album ‘Ghosts In The Fire’ features the power rock trio doing what they do best, with big drums, big guitars and powerful vocal harmonies.  Mixed by Tommy McLaughlin from the Villagers and the video features epic big wave surfing scenes from the West Coast of Ireland.

They have just announced a November National wide tour with dates listed below.