A Place In The Sun Single OUT August 22nd

A Place in the Sun is the brand new single from Co Louth singer/songwriter Niall Boyle. This is Niall’s latest single release taken from the album of the same title since 2011’s critically acclaimed Generation Game the title track of which spent two weeks in the top 30 Irish singles chart.

A Place in the Sun illustrates Niall’s mature and distinctive voice and is a skilfully crafted original song with great melodies, a catchy chorus and lyrics that are both heartfelt and topical- just in time for the heat waves of this Summer!

The album was recorded and produced by Dave McCune and features acclaimed guest musicians such as Maire Ni Breathnach and Michael Buckley. When it comes to emotional ballads Niall is a master craftsman. The album’s title track shows off Niall at his very best. This is a song you’ll be singing to yourself for weeks after hearing it. The album is littered with powerful ballads, catchy hooks and clever lyrics.

“Niall has a fine ear for a catchy melody and a snazzy chorus”, Jackie Hayden Hot Press.

“A master of melody”, The Sun.

“This is an excellent piece of work from the highly talented, well-respected and much-loved Drogheda musician”, Drogheda Independent

IML are delighted to announce 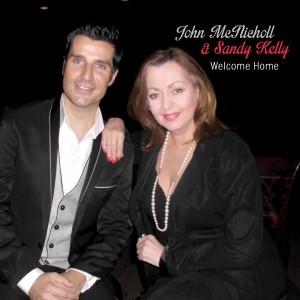 Sandy Kelly  & John McNicholl team up for their new single “Welcome Home” which will be released on June 13th. For over thirty-five years, Sandy Kelly has been one of the top performers in her field. She reached international fame with her family band “The Duskey’s”, when she represented Ireland in Eurovision in 1982. The song titled “Here Today, Gone Tomorrow”, was a success with the public and they finished 12th overall. Although the German entry won the competition, the success convinced Sandy that she had what it took to make it internationally.Sandy went solo and in early 1989, reluctantly recorded the Patsy Cline standard, Crazy. The record became the country’s biggest selling record of 1989. One of her biggest successes in her glittering career was the lead role in “A Musical Tribute To Patsy Cline” which toured Britain for a record 37 weeks before opening in London’s West End, which she enjoyed immensely and states “It was the best years of my life”. Sandy toured the US extensively for the next few years.  Sandy went on to record with Glenn Campbell, Willie Nelson, George Hamilton IV, Chet Atkins and Hal Ketchum among others. These duets would feature on her “Best of album”, which was followed by her collection of Patsy Cline songs including “Crazy”, “I Fall To Pieces”, “Sweet Dreams” and “Walking After Midnight”. Her music marriage to John McNicholl, happened on Irelands premier TV show “The Late Late Show”, when they performed ‘Suspicious Minds’ which they also performed at The Odyssey, Belfast. In 2013 they hosted the “Celtic Note” TV show on Sky TV for 13 weeks and the series was renewed in the autumn of 2013. Sandy will also be performing her Pasty Cline show throughout the UK and Scotland in the autumn and also will be undertaking a major tour with John McNicholl throughout the UK.

JOHN MCNICHOLL John was born and raised in a small village called Foreglen in Derry in the north of Ireland. He is one of 15 children. John’s first taste of stage performance began when he was a young boy performing in local amateur musicals. In his teenage years John worked hard in school and grew up listening to great country artists from both America and Ireland such as Vince Gill, Dolly Parton, George Jones, Keith Urban & Leanne Womack. In 2006 John was the proud recipient of the Best Newcomer Award from Country Music UK. Among other great highlights of John’s singing career to date include sharing a stage with Daniel O’Donnell and Sir Cliff Richard at the Kincasslagh Festival, County Donegal. John also played support to the legendary Sir Elton John.John was introduced to the big stage by Daniel O’Donnell in 2006. After performing in venues throughout Ireland, and then throughout the UK, John soon became a firm favourite with Daniel’s audiences, and now a days they travel the length and breath of the UK to see John perform. In 2011 John performed as one of the main guests at the Wembley Country Music Festival, which was headlined by Reba McIntyre and many more famous names, which John also performed throughout Europe with the same festival. One of Johns major successes throughout the world has been performing a week long concert tour at the famous Dollywood Festival in the US hosted by Dolly Parton.  In 2013, is the year that seen John and Sandy host their own TV show on Sky entitled “Celtic Note”. The series ran for 12 weeks on Sky in the spring and was repeated then in the autumn (2013). Also in 2013 John performed his own one hour special on BBC ALBA in 2013.Now John and Sandy release their new single “Welcome Home” on Friday 13th June in Ireland. John and Sandy will be appearing in theatres throughout the UK in the autumn.