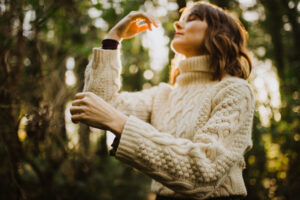 Glenaphuca is the debut album by Irish/English singer and multi-instrumentalist Lewis Barfoot, due for release on 5th March 2021. Glenaphuca features the recent singles Fisherman and Sweet Dreams as aired on RTÉ and BBC Radio. Fisherman is accompanied by a stunning animated music video made by acclaimed Korean visual artist Narae Kim which premiered at Cork International Film Festival in November 2020 and is now screening at both London and Chicago Irish Film Festivals.

Glenaphuca is an album full of evocative, autobiographical songs that speak of Lewis’ wish to unearth the legacy of her family roots in Ireland and is a mix of original compositions and reinventions of traditional songs from Ireland and England. Recent single Fisherman perfectly represents Lewis’s effortless interweaving of the traditional and the original; an original composition by Lewis that infuses a melody from the traditional Irish song Dúlamán.

Elsewhere she beautifully performs traditional English folk song The Fox and gives a stunning rendition of the traditional Irish tune from Connemara, Amhrán Fosuíochta. Other original compositions include the captivating Sister Lover and the elegiac lament for Lewis’s mother White Dress. A timeless  gifted storyteller who transports the listener to strange, magical, otherworldly places. Frequently compared to the likes of Ane Brun and Joni Mitchell, her first EP Catch Me was described by Irish Radio International as “Delicious music: A massage of the heart, a whisper to the soul”.

Online Social Media Links Etc can be found on www.lewisbarfoot.com