HEROES IN HIDING launch a FundIt campaign to bring you a unique visual and auditory experience at their next gig, but they need YOU to make it happen. Read the below information from the band to find out more! 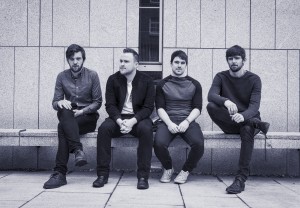 This year our aim is to create a show that is entirely unique to the Irish music scene from which to launch our upcoming record.

Entitled Curtains, the project is a live physical and visual representation of a collection of songs. We invite you to experience a space where the boundary between the eye and the ear becomes blurred, and the barrier between the band and the audience becomes skewed.

Four walls line the edge of a square: you are invited to enter. Images are projected on all four sides. Your eyes turn to follow, your ears always alert.

We will toy with your senses and pick at your emotions so that you leave with something more than just a ticket stub. For as long as we have been together on stage it has always been us telling you the story. This time around we want you to be a part of the story.

Heroes in Hiding are made up of Joe Carroll, Oisín Jacob & Liam McCabe.

To You and The Crew

We have been together as a group since 2005. Since then, we genuinely couldn’t have made it to where we are without your support. Our success thus far is a direct result of your commitment.

We have had the opportunity to play on some of the biggest stages in both Ireland and abroad, we’ve worked with an endless amount of amazingly talented musicians, producers, sound engineers, light engineers, stage crew, promoters etc. and have never taken a single moment for granted.

This project will give us yet another chance to work with a great bunch of people. We have a dedicated crew and have joined with Second Frame Films, who will be curating the visuals for the show.

Why a Fund it?

Curtains is an experience. An experience that we would like to share with you at a specific time in a specific place. On this occassion however, we require some financial assistance to create a project of this scale.