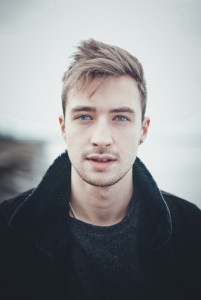 When Christian was nine years old, he resided in the tiny village of Shillelagh, on the edge of Co. Wicklow, Ireland, which rests beside one of the oldest woods in Europe. It was in this quaint setting, full of granite homes with a population of less then 500 that Christian made a connection to nature and music, nurturing his innate creativity. The family garden for example, was once a Friary with a stream flowing through offering a peace that emanated to the mind and you can hear it profoundly though his music, with his lush smooth dark -even celestial at times- vocals that sound like a hybrid of Jeff Buckley and Antony Hegarty (Antony and the Johnsons).

At 18, Christian left for the City to begin studying Jazz. He then took time out to travel and pen his songs. Upon his return, he studied in the Gaeity School of Acting but as always returned to music. Eventually, finding his footing performing in the Dublin singer-songwriter nights with poets & musicians alike, whilst studying in BIMM and forming a band. It was there that he caught the interest of A&R’s from Capitol Records and Island Records thus prompting him to start recording his own material at age 21. The first official release being “Sweet Divine” which was recorded in studio 1 Windmill and was mixed in Temple Lane studios and is out Oct 9th 2015.

Christian now lives in Blackrock, by the sea as he finds its location endearing for his desire to be satiated by earthy, powerful and rich natural surroundings, which transpires into his music allowing him to express and channel an inner reservoir of visceral emotions that are otherwise untouched. Songwriting acts as a catharsis for this aspiring songsmith and singer. Like the final stage of purification: making sense of life’s experiences, pangs and ecstasies. Christian was brought up to always follow his heart and to be open, which translates to the music.  – “Everything I write is always biographical. I have to totally be able to introspectively feel what I am singing about in my songs for them to work. As Oscar Wilde said ‘The artist is not a man who describes, but a man who feels’. In my music I try to encapsulate a feeling opposed to a narrative. Sometimes this can be communicated better through a sound in my vocal opposed to a particular lyric. I recognize the limitations and boundaries in language”.

Check out an acoustic session of the single below.