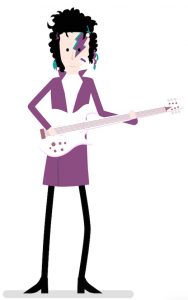 ChilloutRecords introduces Pale White Guy, an animated character with an eclectic musical taste informed by years of honing his craft and watching programmes like Top Of The Pops when artists such as Bowie, T-Rex and Roxy Music lit up our screens and set the platform for the MTV era of pop music.

Pale White Guy draws his influences from some of the most iconic musicians from yesteryear. Thus embracing the present as well as the past, his debut single “Live (Best Things In Life Are Free)” is a pop soul track with driving synths, strings and guitars together with stax influenced horns forming a traditional rhythm section layered with electronics and a positive lyric. Mixed for radio by Philip Larsen (Katy Perry, Lady Gaga, Ellie Goulding, Kylie Minogue), “Live” is a song with a pop sensibility that sticks in the memory and appeals to the repeat button.

‘Pale White Guy’ is the brain child of ChilloutRecords Composer & Artist BP Connor who hails from Dublin, Ireland. A character inspired by all the greats from the 70s and 80s he has a love of life and music. BP has composed numerous pieces of music, for commercial sync and licensing use worldwide across platforms such as MTV, Oprah (Harpo Productions), The Hills – MTV Networks, Sony Music Publishing (Japan), Indigo Films, National Geographic Channel & RipTide Music (Hollywood Film Music Co.)

About the label: ChilloutRecords specialises in electronic, rock and pop instrumentals together with vocal based material.  Their Compositions and Material has been licensed worldwide including various TV networks and production houses since 2002. ChilloutRecords has partnered with The Orchard, a wholly owned subsidiary of Sony Music Entertainment to distribute both digital and physical releases since 2006. Pale White Guy’s Debut Single “Live (Best Things In Life Are Free)” will be available on all digital platforms from April 7th 2017.

The music video for “Live” is currently in production and will draw from influential videos of the MTV era with cameos from a few of todays characters and people culture. Stay tuned!