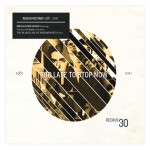 Ft. a rare version of Aslan’s ‘This Is’

Reekus Records recently celebrated their 30 years in business with this stunning flavoursome compilation that they have been threatening to piece together for some time now. With 40 tracks spanning its origins to the present and future. From the humble beginnings in the Kampus Arcadia Cork with live recordings of Nun Attax, Micro Disney, Mean Features and Urban Blitz, through to the early years with The Blades, Aslan, Big Self and others right up to the noughties; The Radio, Saville, Paul Cleary, David Hopkins, Perry Blake, Sweet Jane, and more. It has been a long and winding road with the ever-changing landscape of the music business but Reekus have stood the test of time. Consistent with their staggering level of quality acts; the label will go on and continue, but for now, let us look back retrospectively at one of the finest Irish Indie Labels of the past 3 decades.

The double album is available for purchase at €15.99 from the website www.reekusrecords.com and from record shops!