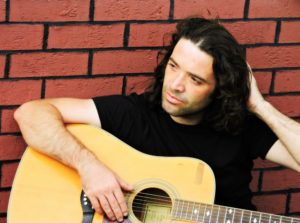 Meath man Pauly Fagan grew up in Navan, with a family of music lovers and musicians. Greatly influenced by his parent’s passion for the arts and music, he and all of his brothers were trained to play instruments and also how to read music from the tender age of 4. His unique voice and harmonies win people over wherever he goes. Word of mouth endorsement from those who have seen Pauly perform live has come from Ireland to as far as Canada where he wrote his last release ‘It’s What You Got’ which garnered over 1 million impacts across Irish radio, from BBC, Rte Radio 1 and many Regional Radio Stations.

Citing his influences Paulo Nutini, Tracy Chapman, the Beatles and Joe Cocker on this new release ‘Wake Me’, he pays homage to laid back attitudes of The Beach Boys, Jack Johnson and Brett Dennen. His panache in songwriting surprises many as he writes song after song as he is often inspired by the world around him and love; won, lost and observed.

A gentle, sweet song about finding your true love, ‘Wake Me’ is about the moment you were caught off guard not expecting to find the love of your life. Pauly wrote the song as a reflection of his own experience when he was surprised that one day out‐of‐the‐blue he met and fell in love with a woman he knew right away would be the love of his life. “You never know what’s around the corner, do ya?” In Pauly’s case, it was not being worried about the future if you are with the one you love. He recorded a few versions but kept coming back to the acoustic version to keep the message and vibe simple and pure… like true love.

‘Wake Me’ was recorded and mixed in Abbey Lane studios in Drogheda, Co Louth with Fran McDermot and Eric Sharpe on production with Pauly and his musical comrade Zeto Feijão Mackenzie. It was Mastered by Fergal Davis. It is released July 25th.