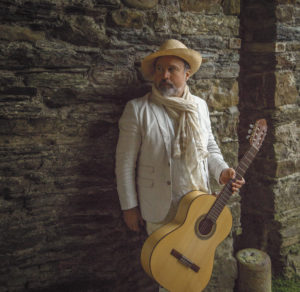 Kenny Dread broke into the Irish radio landscape last year thanks to esteemed Radio 1 DJ John Creedon championing his wistful beach-bum memoir “Sexy Ranger” from the album “We Will Be Lovers”.

Now another track from that album gets its release: “Marvel” – which is an uplifting anthem powered by chiming 12-string guitars, CSNY style harmony vocals, a pumping beat, and electronic wobbles perfect for the festival season.

“Marvel” is a song all about the magic of loving your friends as they actually are, and loving yourself in the process.

You can check out the stream of Marvel here:

Kenny Dread studied composition with Steven Stucky at the Lawrence University Conservatory of Music before stage-diving into the 1980’s Washington D.C. punk-rock scene. He recorded gogo anthem D.C. Groove with Static Disruptors in 1982 and toured the East Coast with gogo punks Outrage until 1987.

The early 90’s found Kenny in the South of France performing with American expatriate rock band The Immigrants, and collaborating with members of that group to create his first solo foray, the dreamy folk-rock Walkin’ Down Your Street. A slow motion move to the West of Ireland inspired a more acoustic mode: The rootsy singer-songwriter album Powderhorn was released in 1997 with contributions from Asian-American guitar wizard Levi Chen and Windham Hill harpist Lisa Lynne, as well as a licensed adaption of poetry by Canadian author Michael Ondaatje. Kirtan yoga chanting became a major focus from the turn of the century: Kenny Dread co-founded and produced Chicago chant ensemble Devi 2000, and performed with kirtan dignitaries Dave Stringer and Bhagavan Das.

Chicago’s indie-rock and Americana scene inspired 2008’s Malastrana which featured guest performances by members of Wilco, Swell Season, and Califone. Years of residency led to full Irish citizenship in 2012, around the time Kenny guested as lead guitarist with Irish roots rockers The Calvinists. Kenny Dread dusted of Red With Wine an outtake from Malastrana for a rushed release in response to the war on music that was the Paris Bataclan tragedy. He recently produced the debut album of West Cork singer-songwriter Miranda McCarthy.