Eleanor McEvoy announces her new single “Believe Me, If All Those Endearing Young Charms”

Eleanor McEvoy announces her new single “Believe Me, If All Those Endearing Young Charms” from her album ‘The Thomas Moore Project’,   to be released Oct 26th 2018. 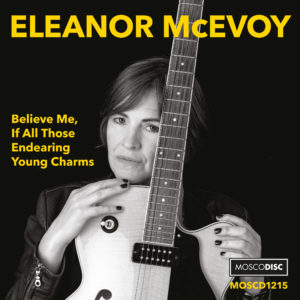 Produced and arranged by McEvoy, who is best known for her songs ‘Sophie’ and the Irish standard ‘Only A Woman’s Heart’, The Thomas Moore Project pays more than homage to this most celebrated 18/19th century Irish poet, singer, songwriter and entertainer (a most colourful Georgian character infamous for being a party to the burning of Lord Byron’s memoirs after his death).

Eleanor said, “The Thomas Moore Project is the first significant step in my long journey to discover the wonderful songs and extraordinary life of Thomas Moore. I’m not sure when I began my intriguing quest but I do remember singing Thomas Moore songs in a choir when I was around nine years of age.

“My fascination is not just with his music but also with his own place in history in a fantastic artistic period with contrasting a social and political upheaval in Europe and Ireland. My journey continues. I hope you will enjoy this and join me. My approach is maybe different; I needed to go further than just pay homage, so my arrangements for this choice of eleven songs are, I think, contemporary.”

Eleanor performs vocals, guitars, strings and keyboards on the album and recruited Damon Butcher from The Beautiful South on keyboards, Eamonn Nolan from The RTE Concert Orchestra on flugelhorn, Eoghan O ‘Neill from Moving Hearts, Chris Rea and Riverdance on bass and Guy Rickerby from Riverdance, Duke Special and The RTE Concert Orchestra on drums and percussion. The musicianship on the album echoes throughout every verse and chorus along with McEvoy’s rich, lilting voice and beautiful playing.

Described by BBC Radio 2 as “one of the few artists who can do no wrong whatsoever”, McEvoy has been on the road for two years with her show ‘Naked…Live’ and this year has gone from being a long-time board member of IMRO (Irish Music Rights Organisation) to being its Chairman.