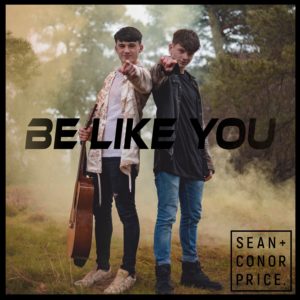 Hailing from Co Wicklow, Ireland, Sean (18) & Conor (16) Price began their music career at the early ages of 13 and 11 and soon after with guitar and mic in hand, they started honing in their live performances by busking regularly in Dublin’s infamous Grafton Street.

Quickly garnering widespread acclaim from their public performances and online music videos and ever growing fanbase, it was in June 2017 when they decided to audition for the X Factor in Edinburgh, Scotland. The busking brothers blew away the judges with their modern rendition of Jimi Hendricks version of “All Along The Watchtower”, complete with a funky rap installation truly making the song their own. After a huge applause, Simon Cowell told the duo: “This is probably one of the best auditions we’ve had. I’m going to say something to you guys – I don’t want to change a single thing from what I saw and heard today.” At Judges Houses in the South of Fance they sang Pink’s “What About Us” and were selected by their mentor Simon Cowell in the Groups category.

They made it to the quarter – final stage before being eliminated, thus finishing in 7th place. They were also part of the 14 Arena X Factor UK & Ireland tour this year. They embark on their own Headline tour called “Be Like You” on June 23rd (Gig listings below).

Citing their early influences as a mixed array of contemporary music, from pop to rap to alternative rock and some folk, they have been inspired by artists such as Eminem, Ed Sheeran, The Script along with Shawn Mendes and Dermot Kennedy. Fellow luminaries, Hudson Taylor also played a big role in influencing and sparking the bands interest in songwriting.

The single, “Be Like You” is out and available for download on April 27th. The single will be available for pre-release on April 18th on all digital platforms. It was recorded and produced in the legendary Windmill Lane Studios with producer Larry Hogan from Dublin Studio Hub.