Scally set to release new Single “Get Ready For War” 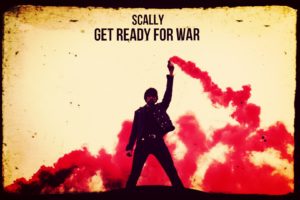 Described by Hot Press as “Energy, balls and pure rock n’ roll” Scally writes and co produces all his own songs. Scally’s songs have been credited for being rooted in working class ideologies – unemployment, teenage pregnancies, drink and substance abuse and crime, whilst also critiquing wider social issues such as homelessness, sex & gender liberation, privatisation of the media and the refugee crisis.

Scally’s band – The Dirty Rats – decorate these messages with intricate licks and flicks, groove filled grandeur for a true rock n’ roll experience likened to Arctic Monkeys and Red Hot Chilli Peppers. Scally has also been gaining notoriety for his on stage antics with his penchant for balaclavas, megaphones, nakedness, whisky drinking and crowd surfing with many likening him to Anthony Kiedis and Iggy Pop.

After building a up kamikaze catalogue of hard and fast rock n’ roll tunes with his band for over two years Scally released his first single in April 2017 titled ‘The 7th Commandment’ which saw labelled as a “definite one to watch” having “both balls and brains” and a swagger deemed “inspiring”(Stuart Clark, HOT PRESS). Bringing ‘The 7th Commandment’ on tour has resulted in the Mullingar man supporting The Strypes, The Minutes, Wolff, New Valley Wolves, Sub Motion and CrowBlackChicken and Mik Pyro. Scally’s second single ‘Get Ready For War’ is released in March 23rd, with a second single to be released before the summer of 2018 with an Irish tour to follow.

“More energy than a Duracell Bunny on speed…..everything you can imagine when you think of rock n’ roll” (Indie Buddie).

“Sure to blow the cobwebs from your mind” – John Loftus (8Radio).

“With his challenging themes and vibrant energy, Scally brings a welcome dash of colour” Will Faulkner (Midlands 103).