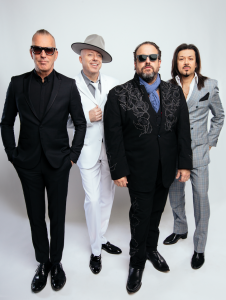 Considered by many to be one of the great and most original American bands, The Mavericks formed in Miami, FL in the late 1980’s, eventually moving to Nashville and launching what would be an incredible career that featured hits, sold out tours and the creation of a large and loyal fan base. The Mavericks created a one of a kind sound that seamlessly blended elements of rock, Latino, folk, blues, country and more.

Led by the mesmerising vocals of Raul Malo, the driving swing of drummer Paul Deakin, the masterful playing of guitarist Eddie Perez and eccentric style of keyboardist Jerry Dale McFadden, The Mavericks have once again solidified themselves as a seminal musical force, both live and in the studio.

For the Festive Season the band have release two Christmas tracks that you can check out on YouTube below.