The Single ‘Daddy I Got U’ ft. ChicagoJonesTheGod has it’s official Irish Release date 24.11.17 officially via Superheroes & Gangsters through Good Seed PR.

From Venice Beach, to Las Vegas back to Dublin.
Time to play the game.
Hard work about to start paying off. 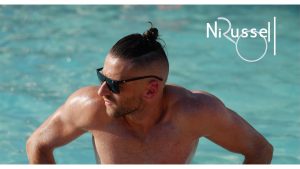 Entrepreneurial spirit is the backbone of every great hip-hop story. The Hip-Hop hall of fame is filled with names who started from nothing, tuned out the haters, aimed high and stepped outside their comfort zone. Vision and self belief are essential to making it in the rap game and Dublin’s own Ni Russells certainly has those attributes in spades.

A musician from a young age – Ni honed his innate melodic understanding over the course of an adolescence playing guitar and piano. As Ni entered into his twenties he became enamoured with the electronic music scene, got himself a copy of Ableton and never looked back. Following stints producing house music and playing DJ sets all over the city, Ni rekindled his fascination with the genre that dominated his teenage years – hip-hop.

It didn’t take long making beats for Ni to realise he had landed on something special. His tracks fuse the unique audio landscapes of 90s hip-hop with the stylistic hallmarks of modern chart hits. Ni, knowing the limitations of the domestic rap scene, set his sights on the bigtime. He collected his best tracks, packed a boombox, and hopped a flight straight to LA in search of collaborators.

Ni posted up on Los Angeles’ Venice beach, pressed play and cranked up the volume. It didn’t take long for Russell to find himself surrounded by up and coming local MCs, each one blown away by the accomplished, radio-ready tracks emanating from the Dubliner’s soundsystem. Ever the entrepreneur, Ni knew he had to keep moving. Boasting an address book stuffed with new industry and underground contacts – Russell upped sticks again and headed for Las Vegas. Ni knew he needed a special talent to do his work justice and it was only when he set up shop on the Vegas strip, once again inviting passers by to freestyle over his beats, that he encountered a talent to match his own – Las Vegas based rapper ChicagoJonesTheGod.

Ni and Jones both knew they had lightning in a bottle. Following a few impromptu recording sessions in Ni’s hotel room, the pair moved into the famous Palms Hotel recording studio. The results of these sessions included the infectious Daddy I Got U – the duo’s first single.

Ni’s time in American not only yielded a brace of brilliant tracks, but also hours of video footage detailing his travels. A documentary exploring Ni’s time in America is currently being edited and nearing completion, samples of this remarkable footage is currently available via Superheroes and Gangsters’ (Ni’s record label) Youtube profile.

Ni’s sounds have approachability and universality. The future holds bright things for Ni Russell and his cavalcade of collaborators.