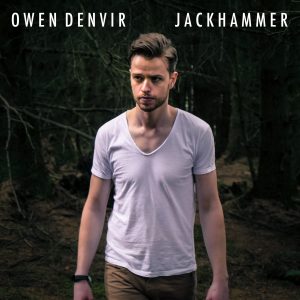 Belfast singer-songwriter & video maker Owen Denvir is excited to announce the release of his new single: ‘Jackhammer’ on Friday 3rd of November 2017 with bonus track ‘Green Light’. The two tracks showcase this vibrant Singer Songwriter’s panache and style of writing blissful pop songs taken from the everyday, such as breaking up and picking up the pieces by getting yourself back out there. Denvir’s vocals take centre-stage, making for a masterfully meditative tale of pain, solace, redemption and hope.

Take ‘Jackhammer’, which marks a move to a new country resulting in a break up, and ‘Green Light’ – the resulting anxious venture back into the world of dating via the popular app Tinder. “I was waiting for a reply from someone that I’d matched with: a ‘green light’ notification on my phone… and these two songs mark the yin and yang process of losing and finding love… I am a hopeful romantic”.

An avid video and mash-up maker, Owen caught the attention of Coldplay with his “Best Of” mash-up, performing a fusion of hits from their first 7 albums. His full series of split-screen multi-instrumental arrangements have surpassed 2,000,000 views across YouTube and Facebook