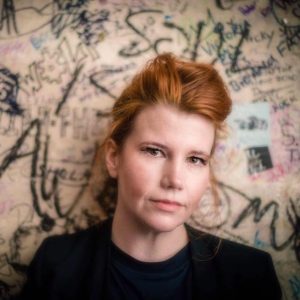 Linda Em is a London based roots singer-songwriter who hasn’t forgotten her Irish roots with Celtic shades running throughout her music. As well as classic Woodstock era songwriters such as Leonard Cohen, Kris Kristofferson and Melanie Linda’s lyrical narrative is heavily influenced by the authors, poets, playwrights and artists that inform the strong storytelling aspect of her songwriting. The subject matter of her songs runs the gamut from myths and legends, the inspirational figures she has known in her own life and the battered but noble occupants of the typical ‘old man’s pubs’ of pre-hipster East London and such is the case with new singles ‘Buccaneer’ and ‘Stories’ set to be released on June 23rd.

The feedback on ‘Stories’ is certainly an optimistic one; celebrated Irish DJ Roddie Cleere (KCLRFM) said “it feels like it is a song from the 60’s folk scene”… while DCFM’s Mick Hanley said it was a “brilliant” tune! Radio Kerry also gave it the thumbs up as have uRadio & BBC Radio Ulster. Linda’s clear, warm, sultry vocal draws the listener into her musical story telling. What‘s unique is the extraordinary mix of influences that create Linda’s original Roots sound. There is certainly folk (revisited from a present-day London / Irish cultural perspective) but also with a bit of rock, front porch blues, torch song and even a hint of ska and trip-hop if you listen closely enough. The production of her songs takes you back to the 1960s and 1970s but with a modern day, eclectic feel.

Details on Upcoming singles: ‘Buccaneer’, written with and recorded by Linda’s long-term collaborator Chris Wyatt and mixed by Charles Foskett, combines a classic 1960s big ballad arrangement with traditional instrumentation to pay tribute to an influential mentor. ‘Stories’, written with Eamon Gilmore and recorded by Chris Wyatt is a more introspective song, rich in atmosphere which draws the listener in further the more it builds.

Live, Linda Em can be accompanied in an intimate acoustic setting or by her full seven-piece band, which includes soulful backing singers along with violin, bouzouki and bódhran – bringing that Celtic feel to the music. her upcoming Irish Gig dates are listed below.