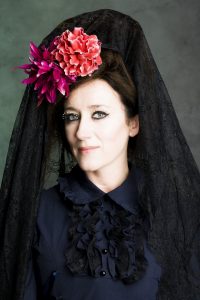 Maria Doyle Kennedy, the Irish luminary, singer, writer, actor and filmmaker, announces the release of her brand new single ‘Pride’ taken from her forthcoming album (title yet to be announced) to be released later this year. ‘Pride’ is not so much a call for tolerance as a bald statement of common sense set to a back projection of deeply moving acoustic rhythm. It will be released on June 10th 2017 via Mermaid Records. Says Maria of the songs context: “The idea that 2 people find love with each other and want to celebrate and share that… I can never understand why there would be an objection to more joy in the world… why some folks feel that they need to sit in judgement of others and that they may prescribe how others should love and live. I believe that the freedom to declare and celebrate your love with your chosen partner (as long as it’s their choice too!) is a human right”.

Maria’s recent TV acting credits include Orphan Black (for which she won 2 Canadian Screen Awards) and Redwater. Recent films include Sing St and The Conjuring 2. Maria has also starred as Katherine of Aragon, nanny to the son of a serial killer and the estranged wife of the lovely Mr Bates from the three award-winning television series, The Tudors, Dexter and Downton Abbey. Most recently she has completed work on her own film A Different Kind of Day.

In May 2014 Maria featured on the album “Printer Clips” with Paul Noonan, Joan As Policewoman and Martha Wainwright amongst others. Prior to that she released Critically acclaimed album “Sing” in 2012 that featured duets with Damien Rice, Paul Brady and John Prine. Maria sang live with Snow Patrol in 2011 and 2012 and has spent more than two decades performing all over the world.  On her new 13-track album, Maria’s ever evolving artistry explores the human condition and parts of the American landscape, its political spectrum along with it’s people, their harsh realities, emotions and a lingering hope delivered in a tone halfway between Patti Smith and Dusty Springfield. Upcoming single ‘Pride’ was written by Maria Doyle Kennedy and Kieran Kennedy. Produced by Kieran Kennedy. Recorded and Mixed/Mastered by Rob Kirwan in Dublin, Ireland.