Nigel Connell has our vote!

A big well done to our very own Nigel Connell who will be battling on this weekend in the semi finals of Rte’s The Voice of Ireland! You have our VOTE!

Nigel Connell was born into a musical family of two brothers and two sisters. He is the youngest of five and once he could walk, it meant he could talk and eventually sing, so into the family band he went and it was here where his skills as a Drummer and Singer developed. His first Live performance was at the age of 13 in the family band, he later joined the The Legendary Cotton Mill Boys and went on his first tour at the age of 15. Addicted to the stage, Nigel went on to play with Top Irish Acts like Matt Leavy, TR Dallas, Sean O Farrell and Marc Roberts. Playing Support to legendary Music luminaries such as Tammy Wynette, Don Williams, Ricky Skaggs, Johnny Cash, June Carter, Martina MC Bride, Randy Travis, Vince Gill, Steve Earle, Glen Campbell & John Denver.

No stranger to performing on national Television, Nigel has performed his musical skills on a variety of Irelands finest:  Live at Three, Up for the Match, Kenny Live, Nationwide, The Late Late Show, Phil Coulter and The Bibi Baskin Show. Nigel has also performed on radio Nationwide such asRTE Radio 1, 2fm, Phantom FM and Dublin’s Country to name but a handful.

By his 20’s Nigel was well accustomed to the Country Music Scene, but decided it was time for a change and began touring with Eurovision Winner Linda Martin. Upon hearing Nigel’s remarkable vocal talent, the now infamous music manager Louis Walsh encouraged Nigel to enter the Eurosong Contest in 1999, where he reached the Final in Ireland but sadly didn’t reach the Eurovision. The experience was nonetheless enough incentive for Nigel to begin work on his own recordings and so began Nigel’s own singing and songwriting career. Nigel soon got the starring Role on Rebecca Storms ‘Streisand songbook’ and Performed alongside Rebecca in Dublin’s Gaiety Theatre for Ten Shows. He then Toured Ireland from:The Cork Opera House to The National Concert Hall Dublin. Where he performed Live on the Phil Coulter RTE special in 2007. (Phil Coulter being a fan of Nigel’s remarkable voice said “Nigel sounds so much like Neil Diamond”

It is only fit that now Ireland is widely supporting one of its greatest musical assets, from local and National press hailing him as the one to watch in the semi’s this Sunday at 6.30pm on Rte 1! 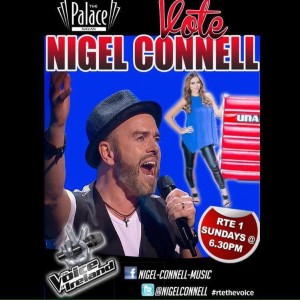 Check out Nigel from Team Una owning Whitesnake’s “Here I Go Again” at The Quarter-finals on The Voice of Ireland series 5 episode 15!!