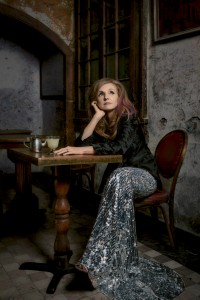 The first quiet piano notes of the title track of Patty Griffin’s new album, Servant Of Love evoke a sense of mystery.  “I want to live by your ocean/Moved by the waves/No one can see.”  Go further into this haunting, jazz-steeped meditation, and that sense turns into a spell.  With lulling piano, fathoms-deep bowed bass and improvisational trumpet floating above like a swooping gull, Griffin conjures the call of the depths in literal and metaphorical terms (“words from the deep, calling to me…”) and invites us on her odyssey to answer that call.

Over nine albums, Patty Griffin has proven herself a writer of uncommon perception, with a genius for character-driven story-telling.  On this, her tenth, she brings that genius to bear on her over-arching themes. The same trans-migrated soul seems to inhabit the characters in these songs, all different, yet all walking the same beat, speaking from the same source:  the storyteller herself, of course, but also, the album suggests, a greater source.  A source we reject at our peril.  That melting polar ice cap in “You Never Asked Me”?  That’s no metaphor.  That’s the real world consequence of our spiritual deficit.

As Servant Of Love travels through different musical terrains—folk and blues, rock and jazz, ancient sounds and modern—a spare, organic quality persists.  Patterns and recurrence weave through the album in small ways and large:  the drone of open tunings, modal riffs and bluesy moves, images of nature. That lonely trumpet. They create a sense of sonic return that buoys Griffin’s larger message:  Love persists. In the dark, in the mud, in disaster, in the sun, there love is. An elemental force.

While any song on Servant Of Love stands alone, each a vivid gem mined from a rich vein, together they create an emotional arc of unusual depth.  Patty Griffin might take us into the dark, but she doesn’t leave us there.  Instead, she brings the mystery into the light, and by the last song, “Shine A Different Way,” a joyous, tuneful paean to surrender and rebirth, we feel we really have traveled her road with her.  Now we end by the sea where we started,, with “…the moon and the glistening waves,” a little more ready, perhaps, as Rilke said, to “live the questions.”

Patty Griffin is a Grammy-Award winning artist who has achieved great acclaim for her songwriting as well as her powerful voice. Her first two albums, Living With Ghosts and Flaming Red are considered seminal albums in the singer-songwriter genre, while Children Running Though won Best Album and led to her being named Best Artist at the 2007 Americana Music Awards. She won the Grammy for Downtown Church, her 2010 gospel album. Her songs have been covered by a myriad of artists including Emmylou Harris, The Dixie Chicks, Joan Baez and Bette Midler. She was born in Old Town, Maine and resides in Austin, Texas.