Single “The Chosen Few” Out on iTunes August 14th

Red Empire have just finished their debut album, “Inhale”. Previously chosen as the nationwide UTV Radio Group’s ‘Select Irish Artist of the Month’, which garnered much national attention for the band in 2014. In addition to this, the band were chosen as 98FM’s ‘Home Grown Heroes’ and DCFM’s ‘Tune of the week’ and were earmarked for success on RTÉ Radio 1’s ‘John Murray Show’ and Today FM’s ‘The Mix-Up’. But perhaps most significantly the band performed two live nationwide TV performances on RTÉ Television’s ‘The Saturday Night Show’ and Tg4’s “Roisin Show” in 2014. The band also received the endorsement of numerous music industry heavyweights such as John Hartmann (ex-manager of The Eagles and Sonny and Cher). 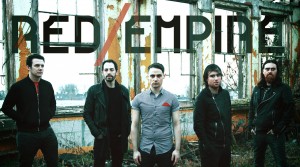 The forthcoming album, which is set for a late 2015 release date, has captured the band’s trademark well-crafted melodic sound, ‘The Chosen Few’ is the current single and is a testament to the bands trademark sound of melodic pop rock.

Throughout 2014 the band, who hail from all over Dublin, continued to play their increasingly well-known high-intensity live gigs all around Ireland and have gone down a treat at festivals such as The Westport Festival of Music and Arts, Fortstock and The Coors Light Weekender in Cork. Indieweek.com described seeing the band play live as a “kick-ass, very energetic live show.”

With an ever-growing fan base and a bourgeoning roster of gigs throughout Ireland in 2015, Red Empire look set for bigger and better things. Having already played in venues like the Olympia Theatre, Vicar St and the INEC in Kerry amongst many others right throughout the country the band have proven their worth on the big stage. And with the band touted as “serious contenders for some well-deserved attention” and “destined for a bigger and brighter future”, many commentators have noted that the Red Empire journey is only beginning.