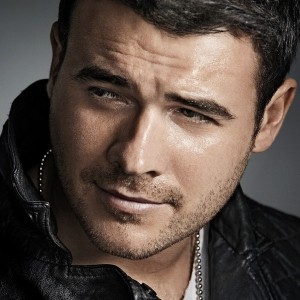 has performed at some of the world’s most sought-after events, including the 2014 Sochi Olympics, the Miss Universe global telecast and Eurovision Song Contest. After a prestigious win at the 2014 World Music Awards, iTunes USA, the world’s biggest music site, named Emin’s first single, “Amor,” one of its Hot Summer Singles.

On February 20th 2015 Emin will release his, first ever, Irish single “Footsteps” on iTunes. It is a heart-felt infectious anthemic track with a simple message, a sweet melody served on a plate of pop.

The single is taken from Emin’s forthcoming album “More Amor “ which will be released on iTunes in March, 2015 on Saffron Music, published by Sony ATV and distributed by ADA/Warner Music.

“more…AMOR” will be Emin’s seventh English language CD and was written and recorded in New York City. Emin co-wrote most of the songs with writers from Dee Town Entertainment and UK hit-makers Paul Barry and Jamie Scott — who wrote One Direction’s recent worldwide hit, “Story of My Life.” The album also features a track by Grammy Award winning producer and mixer Tony Maserati. Tony’s hits include Beyonce’s “Dangerously in Love”, Lady Gaga’s “Marry the Night”, Marc Anthony’s “I Need to Know” and tracks for many other top hit makers.

The new album, “more AMOR” explores diverse avenues from pop dance tunes to beautiful ballads: there is a Maroon 5 vibe on songs like ‘Boomerang’, the lush orchestral single ‘Woman’ the sultry and the sexy Latin flavoured ‘Amor’. All these tracks showcase a voice that already sounds classic: yearning, strong and emotional with flavours of Chris Martin or early Paul McCartney.

“This past year has been just unbelievable, winning a World Music Award, Golden Gramophone Award and taking my music to Europe… just incredible,” says Emin.