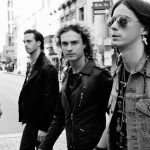 NEW SINGLE NOTHING LEFT TO LOSE

Heaven’s Basement, release Nothing Left To Lose, from their eagerly anticipated debut album ‘Filthy Empire’, on the 1st February 2013 via Red Bull Records. Nothing Left To Lose is brimming with energy and the neck snap dynamics of great rock’n’roll accompanied with an  irrepressible chorus.

To see the video go to http://youtu.be/kP1u79wSdDY

‘Filthy Empire’ recorded in LA by producer John Feldmann (Black Veil Brides), is steeped in energy and the resulting slab of rock sees a healthy dose of contemporary freshness added to the bands sound.

The album, features 12 tracks including the singles ‘Fire,Fire’ and ‘Nothing Left To Lose‘ and conjures the greats – the high-wire swagger of Led Zeppelin, the outlaw chaos of Guns’n’Roses – without ever copying their moves. Don’t be like your heroes, be as good as them, seems to be Heaven’s Basement’s game. “We wanted to take the ambition of all the great rock’n’roll that came before us, the essence, but make it sound completely modern and relevant,” explains Sid Glover. “I want people to say , ‘Fuck man, I haven’t heard an album that’s made me feel this pumped up in ages, I haven’t seen a band with this much energy and ‘Go fuck yourself’ attitude…’” It’s hard to imagine the album stirring any other kind of reaction, to be honest, and for Heaven’s Basement, this is clearly only the beginning.

Track listing for the album is as follows:

4.   When The Lights Go Out In London

7.   Heartbreaking Son of a Bitch

Pre-order the album now from http://heavensbasement.sandbaghq.com/  and get ‘I Am Electric’ as an instant grat (as used on Need For Speed game).