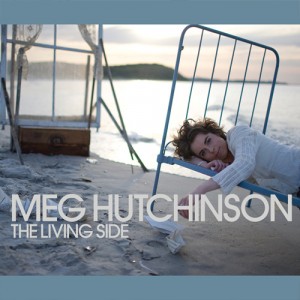 MEG HUTCHINSON||the living side – May 28th

Called a “master of introspective ballads” (Performing Songwriter), award-winning acoustic songwriter Meg Hutchinson brings a poet’s sensibility to everyday scenes, painting a vivid picture of the way America lives today, giving us her most political and personal album to date – THE LIVING SIDE.  Upon its initial release the Album reached #8 on iTunes Singer-Songwriter chart, #5 on Amazon Hot New Folk Albums and is currently #32 on the BILLBOARD Folk Chart (Climbing)

Meg Hutchinson takes us on a musical journey deep within her life, where we see our own lives reflected back at us. Turning her poet’s eye toward these uncertain times with that same honest, closely observed perspective from which she charts her most intimate songs, she asks the questions that plague all of us. “I think of this album as a conversation,” Hutchinson says. “These songs are full of questions, and I’ve tried to leave space for the listeners to answer.”

Hutchinson’s songs begin with vivid, naturalistic images, of apple orchards and trailer parks, stark factory towns and the Statue of Liberty. But she is guiding us to more intimate places, exploring how we feel in this time of fast and frightening change. Whether singing about technology, billion dollar bailouts or global warming, Meg Hutchinson makes these big issues personal by showing how they affect our everyday lives. She goes beyond the casual observation of current events and explores the emotion behind the experiences, bringing the characters’ inner lives out into the open, as is evident in the tracks “Being Happy” and “Gatekeeper.”

These songs were brought to life with the help of veteran producer Crit Harmon (Lori McKenna, Mary Gauthier, Martin Sexton), who worked with Hutchinson on her last critically acclaimed album COME UP FULL. Keeping Hutchinson’s vocals at the center of the recording, Harmon brought in some of New England’s best and busiest session players including Kevin Barry (guitars), Richard Gates (bass), and Brad Hatfield (keyboards, string arrangements). With moody wurlitzer and lush strings, THE LIVING SIDE is cinematic and hopeful – a hypnotic musical ourney that takes on new emotional meaning with every listen and encourages us to choose the living side.