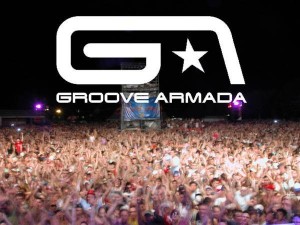 Groove Armada – Andy Cato and Tom Findlay – release a wicked double-punch AA-side single ‘Look Me In The Eye Sister/Just For Tonight’ on April 26th. Both tracks are taken from their fifth studio album ‘Black Light’, which is widely considered among their best work to date (“SHOULD FILL EVERY DANCE FLOOR ON THE PLANET” ***** THE SUN, “A REVELATION” **** UNCUT, “A BOLD STEP FORWARD” **** Q, “THEIR BEST ALBUM” **** SUNDAY TIMES).

Both written and produced by Andy Cato and Tom Findlay, ‘Look Me In The Eye Sister’ is a spiky, beefed-up slab of Yeah Yeah Yeahs-style electro-rock while ‘Just For Tonight’ is the album’s gorgeous mellow gem. “We’ve decided to go for a double A-side, as much as those things exist in the digital world,” says Andy. “We’re being a bit contrary there because apparently ‘History’ is currently the most downloaded individual track.”

Both feature guest vocals from Jess Larrabee of Brooklyn folk/blues duo She Keeps Bees, whom Groove Armada have yet to meet. “We got really into her albums and started emailing tracks for her to add vocals,” says Andy. “Her music usually has more of a White Stripes kind of vibe. She got really into the disco flavour and absolutely nailed it.”

The release – available to buy digitally – also includes remixes of ‘Look Me In The Eye Sister’ by Urchins, Audiojack and Morten Sorensen.

The track listings for the two digital  singles are:

Groove Armada bring their blissful party vibe to the Great Escape festival in Brighton (May 13th-15th) and to 3 other major festival dates this summer at T in the Park (July 9th-11th), Oxegen (July 9th-11th) and V Festival (August 20th-22nd). “V’s going to be interesting,” says Andy, “because we’re going on before Cheryl Cole. All I can say is “Good luck Cheryl!”