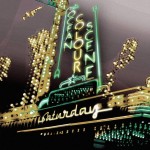 In the two years since 2007’s On The Leyline – described by Uncut as their “career best” – they’ve played with thrash metal bands in Korea, stolen the show at this year’s ‘V’ (where they were named ‘Band Of The Festival’ by Radio 2 and Absolute Radio) and later this month will jet off for a debut show in Dubai.

From the opening bars of  psych-folk opener ‘100 Floors Of Perception’ – written by Simon about the on-going financial crisis – to epic climax ‘Rockfield’  (think ‘Baba O’Riley’ meets ‘Tomorrow Never Knows’), it’s a reminder than when it comes to delivering  classic rock hooks there is simply no one better.  Denim-driven boogie ‘Old Pair Of Jeans’ (written by Bennett) will delight those hankering for the full-tilt mod-pop of ‘For Dancers Only’, while Harry Kidnap’ (written in tribute to John Weller) boasts shades of North Atlantic Drift stand-out ‘Make The Deal’.

Musically, it’s just as impressive.  Listen close and you’ll hear echoes of  everyone from Simon & Garfunkel to Mott The Hoople and Vivaldi in these loose-limbed grooves,  not to mention  trippy string sections, sky-scraping ‘Great Gig In The Sky’ backing vocals, punk riffs and even the occasional burst of mandolin.

Surefire smash ‘Magic Carpet Days’, meanwhile (key lyric: “The world won’t shake you/Knock you down and break you/I’ll steer you through these magic carpet days”) is a reminder that their belief in the Mod aesthetic of self-improvement remains as strong as ever.

With a full U.K tour booked for early next year, OCS will be celebrating in style. But before then…and

In the meantime, they’ll see you in Ireland in The Olympia on Saturday.