The River Valley band to perform in the RDS at the Magners league Match!

THE RIVER VALLEY BAND have been officially invited to play their new single ‘KIMBERLY’ at the interval of The Magners League – Leinster V Cardiff Blues match on October 31st 2009 in the RDS Dublin, Ireland to an estimated 18,000 people audience. 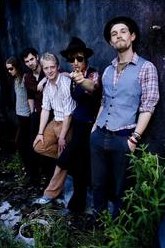 ‘Collectively made up of Danny Coady on vocals, mandolin & rhythm guitar, Eoghan Leadbetter on piano & rhythm guitar, Conor Brett on lead guitar & vocals,  Liam Teehan on bass guitar and finally David Thompson on drums & vocals. These are 5 young men with instruments in their hands and a recession at their feet’.

Described by radio around Ireland as “Absolutely Brilliant- they will be pushing doors open where ever they go!” – PAT KENNY RTE RADIO 1, “Absolutely Fantastic”- Dublin’s Country Mix, “ Class” – WLRFM. The River Valley Band’s music is drenched in a ‘semi-south American rock and roll country tone’, so do not be surprised of the fact that they are all Kilkenny-born. Reminiscent of The Band, insofar as it’s evident that these are five individual musicians working democratically, they are not led by any one or two persons with added musicians filling ‘roles’, but are a collaboration of ideas and come across as a rich and textured mature sounding group.  Their first offering – a full bellied assortment of deep rooted rock n’ roll is titled ‘KIMBERLY’ and has a release date of 12.01 am on October the 16th in the year 2009. All steps in their master plan for releasing their first album, Drunk in the Wine Cellar, in early 2010. The music for the album was written behind a glassblowing factory, with plenty of heat, tea, coffee, comfortable chairs and an ensemble of instruments.

Official TOUR: After a full house in The Academy2 in late September 2009, The River Valley Band came to the conclusion that the live circuit needs them…. A full Nationwide tour will be announced very soon on their website and will see the band play all over Ireland with some European dates too in November 09 right up till 2010. They play this weekend in their hometown of Kilkenny in The Bridgebrook Arms on Friday night, and on the Saturday night they will play in Ryans Back Room in Kilkenny after an earlier instore @4pm in Heart Beat City record shop.

For guest press/radio dj passes to their gigs: please feel free to contact me at linda@goodseedpr.com